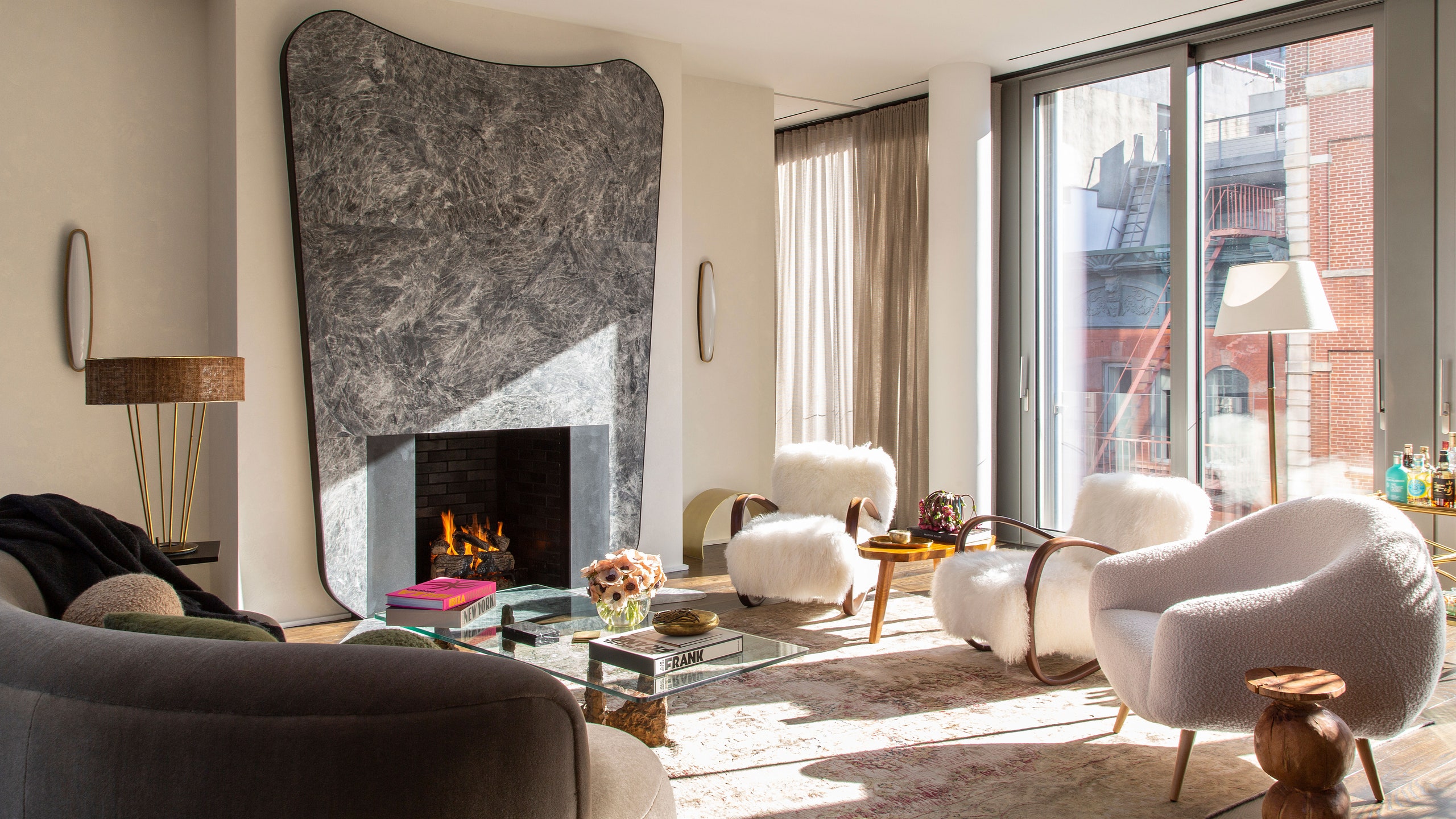 Samuel Amoia’s meteoric rise in the design world is one of those “only in New York” stories, one where raw talent, hard work, and sheer luck come together serendipitously. A decade ago, at a party at the Top of the Standard (a boîte then, and now, frequented by tout le monde), the former model met Stephen Sills and managed to parlay his way into an apprenticeship with the celebrated interior designer. By 2015, Amoia had established his own studio and launched a furniture collection. Not long afterward, he was named a “rising talent” by Maison & Objet, was written about in Vogue, and collaborated with Manhattan’s DeLorenzo Gallery on a limited series of geometric tables and consoles. “Being in the downtown social scene set me up for success,” he says, referring to the time in his 20s when he worked at hot spots like Indochine and Bond St. “I made really good friends, and as soon as I started my business, they helped me out; I was pretty fortunate.”

Machiko Edmondson’s Sign (2014), a close-up of a young woman’s face, informed the color scheme of the master suite. The cocoa-tinged leather headboard is from Restoration Hardware’s Modena collection, the mahogany nightstands are midcentury pieces purchased at Chairish, and the gray ceramic table lamps were found on 1stDibs. “There was something very innocent but sensual about it,” says Amoia of the painting. “We went with a light palette of the walls and carpet, and soft wood furniture, juxtaposed with navy-black heavy linen drapery.”

Amoia’s self-taught aesthetic, which could be summarized as an imaginative take on Art Deco and Italian modernism, has caught the eye of high-profile clients like Lauren Santo Domingo and Stella McCartney. His latest project—a 2,800-square-foot pied-à-terre in SoHo, conceived for a young businessman based primarily on the West Coast—shows the designer’s flair for reinterpretation and customization. The apartment’s showpiece is a towering onyx fireplace inspired by Gio Ponti’s iconic F.A.33 mirror from the 1930s, which curves distinctively along its edges. “The fireplace is a work of art and really makes a statement,” says the client. “All my guests ahh over it.” To complement its silhouette, Amoia placed curvaceous objects throughout the living room, including a Pierre Agustin Rose sofa with overstretched round lines and two Jindřich Halabala armchairs framed by ribbons of wood. Massive windows with views of SoHo’s industrial rooftops add some sharp angles to the mellifluous picture.

Another eminent designer of the early 20th century, Jean-Michel Frank, inspired the look of the media room. Looking at the French master’s “croisillon” lamps, some of which were made in grooved wood, and some in patinated bronze, Amoia came up with the idea to cover the walls in a highly textured plaster, custom-made by artist Benjamin Lai. The wall’s grayish amber tint, together with low sectional seats upholstered in auburn leather and a wall sculpture of spiky vermilion circles by Luke Todd called Red Bloodbath, helps set a moody, masculine vibe. Sheer sepia curtains cast a warm glow across the space. 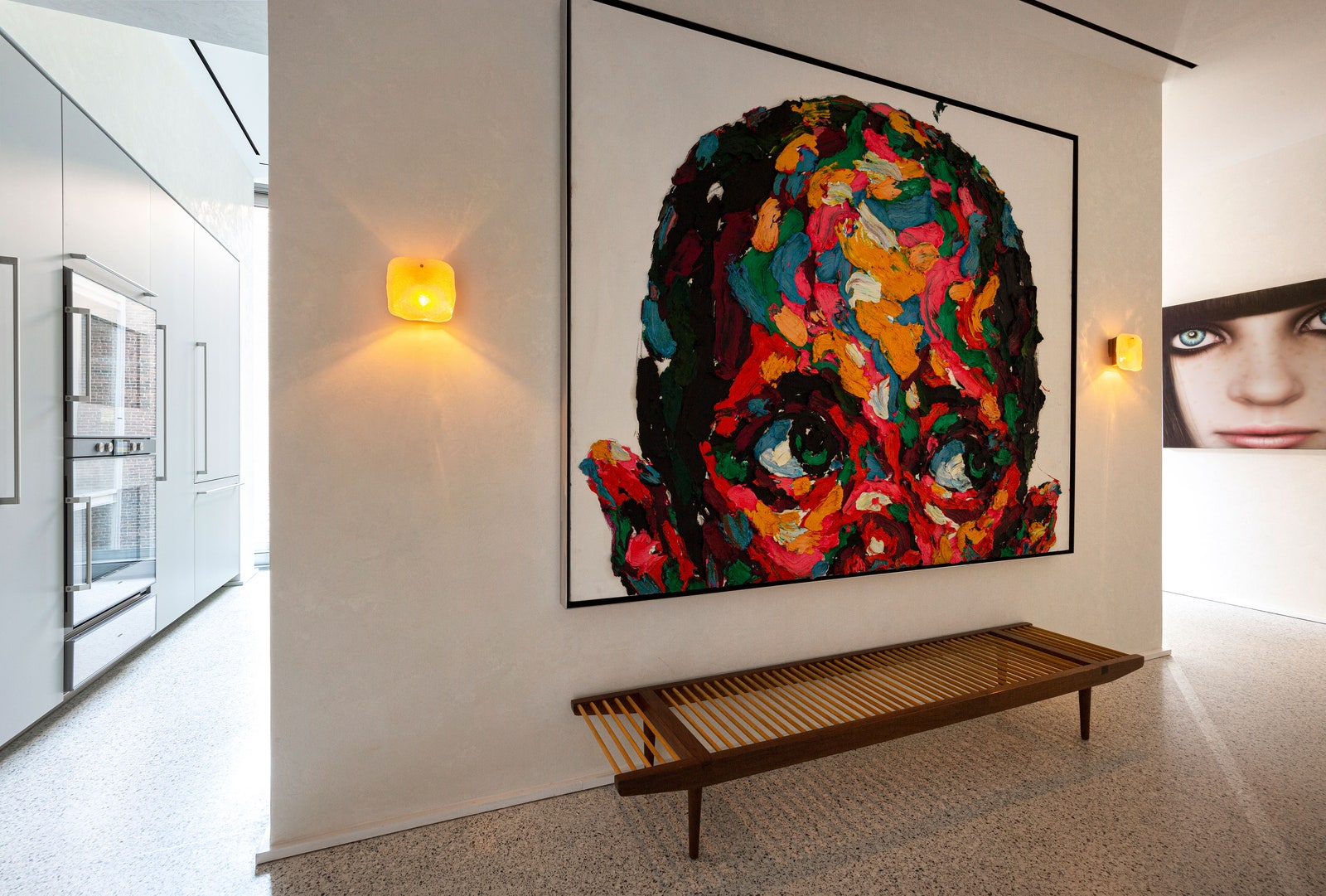 Designer Samuel Amoia decorated this 2,800-square-foot apartment in SoHo, a pied à terre for a young businessman based primarily on the West Coast. The property shows the designer’s flair for reinterpretation and customization. The foyer leading to the kitchen and living room is anchored by a highly pigmented oil on canvas by South Korean artist KwangHo Shin. To the right, we see a portrait by British artist Machiko Edmondson. Both were purchased at Unix Gallery. The sconces, which simulate ice cubes, are from Flessas Design 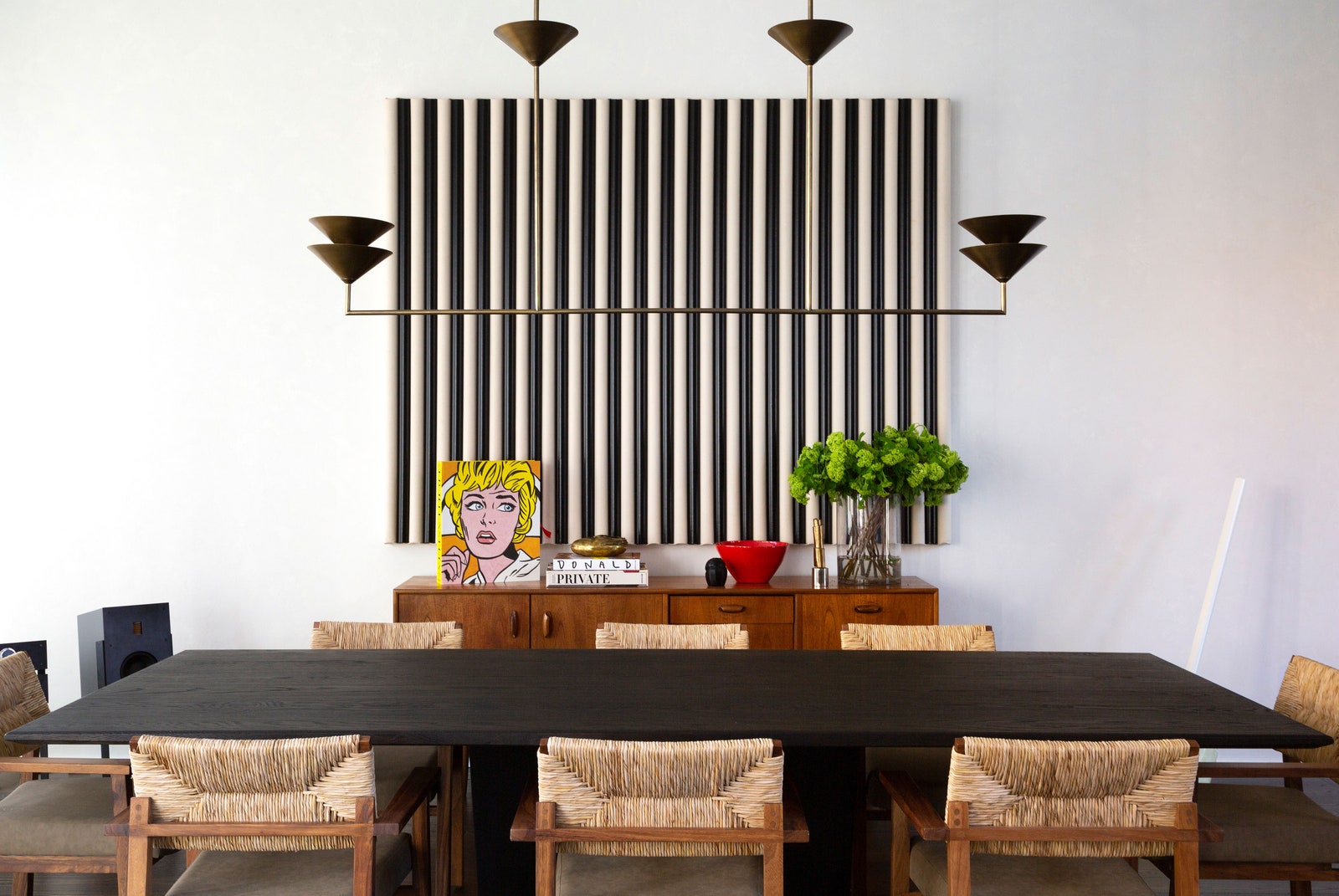 While many of the furnishings in the apartment have an early 20th-century style, bold artworks act as a modern counterbalance. In the dining area, a black-and-white oil painting on a shaped canvas, by Japanese artist Hisao Hanafusa, harmonizes with a tiered light pendant from Volker Haug Studio. The blackened steel-and-wood table is an I-Beam model from Restoration Hardware, and the dining chairs, made of Mexican tzalam wood, were made by Comité de Proyectos and purchased at 1stDibs. 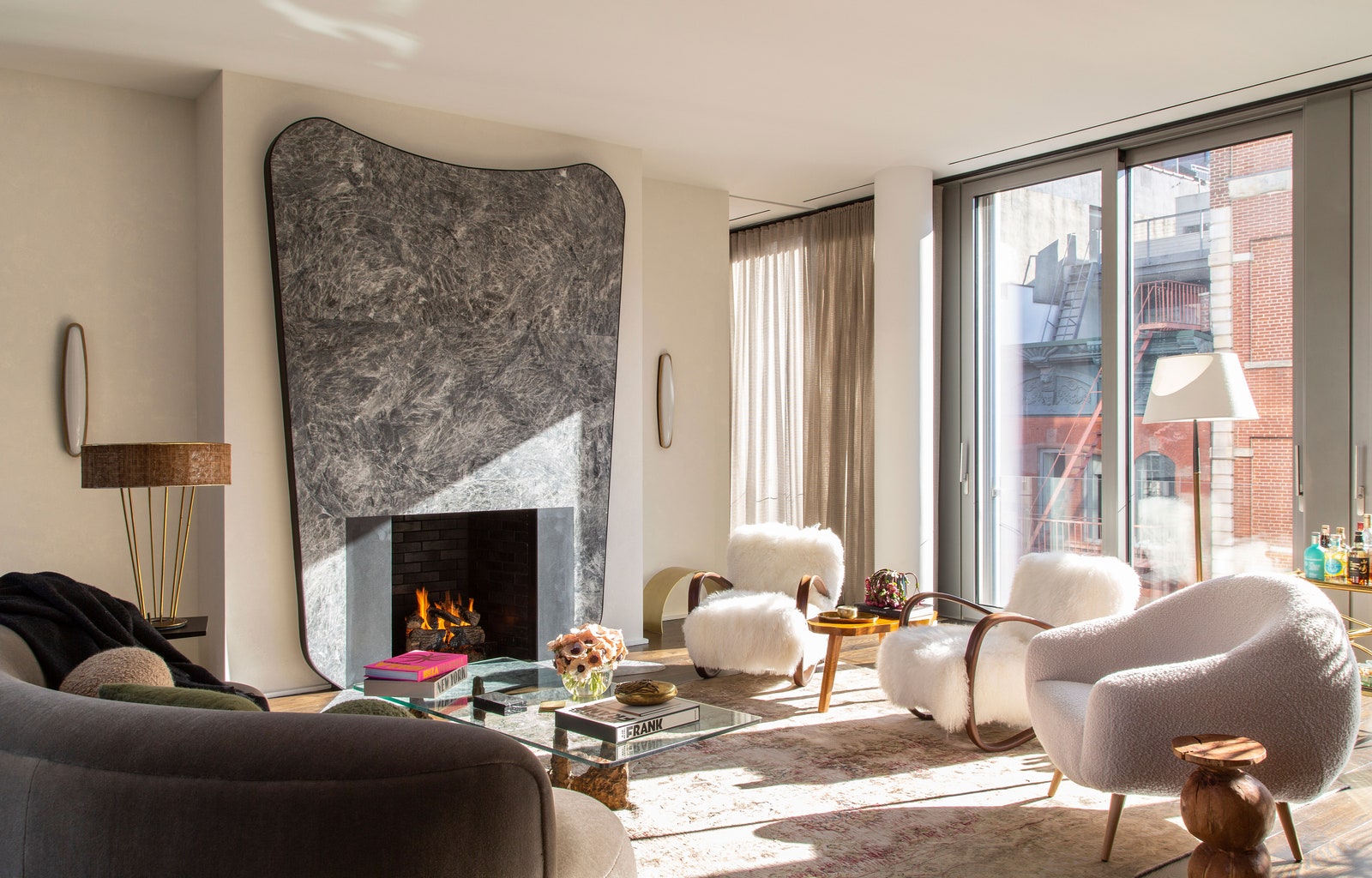 In the living room, Amoia looked to Gio Ponti’s iconic F.A.33 mirror to design the onyx fireplace, which set the tone for the rest of the space and its curvaceous silhouettes. A Pierre Agustin Rose sofa with overstretched round lines was paired with two Jindřich Halabala armchairs framed by ribbons of wood and upholstered in plush Tibetan lambswool. The oval sconces on either side of the fireplace are from Dimore Studio and the floor lamp is a Ted Stiffel model from the 1950s. “My client is a big Gio Ponti collector, but he couldn’t bring some of his pieces over here,” says Amoia. “That set off the idea to design this fireplace and make it the soul of the project.” 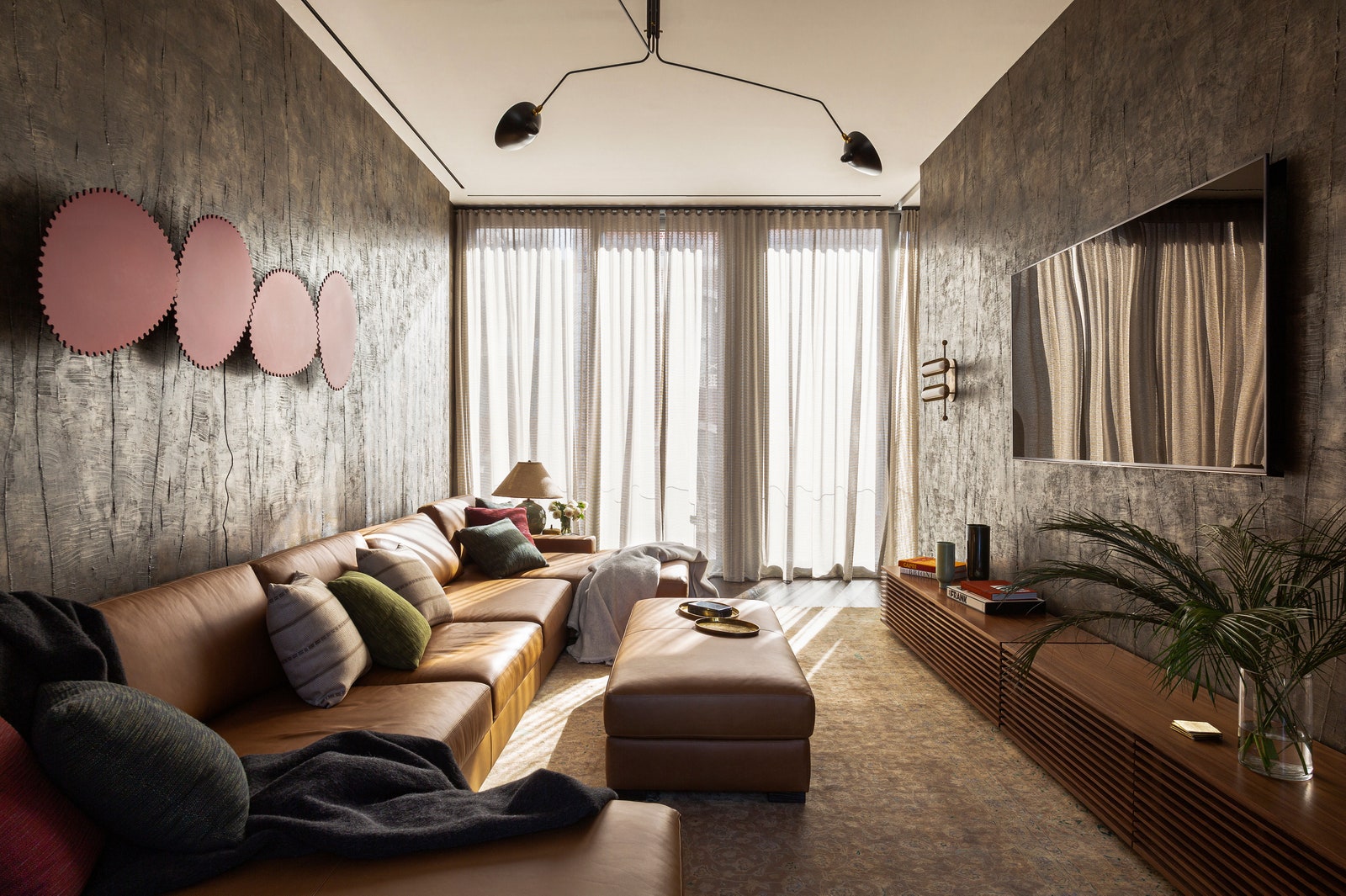 In the media room, the highly textured plaster walls were commissioned from artist Benjamin Lai as a nod to Jean-Michel Frank’s “croisillon” lamps, some of which were made in grooved wood, and some in patinated bronze. The Modena auburn leather sectional from RH, together with a low walnut console from DWR and sheer sepia curtains made with Pindler’s 5927 fabric, helps set a masculine yet warm atmosphere. “The curtains have a bronzelike sheerness, and they're always closed,” says Amoia. “When the windows open, and they are flying through the apartment because of the breeze, everyone always looks so great in the glow.” 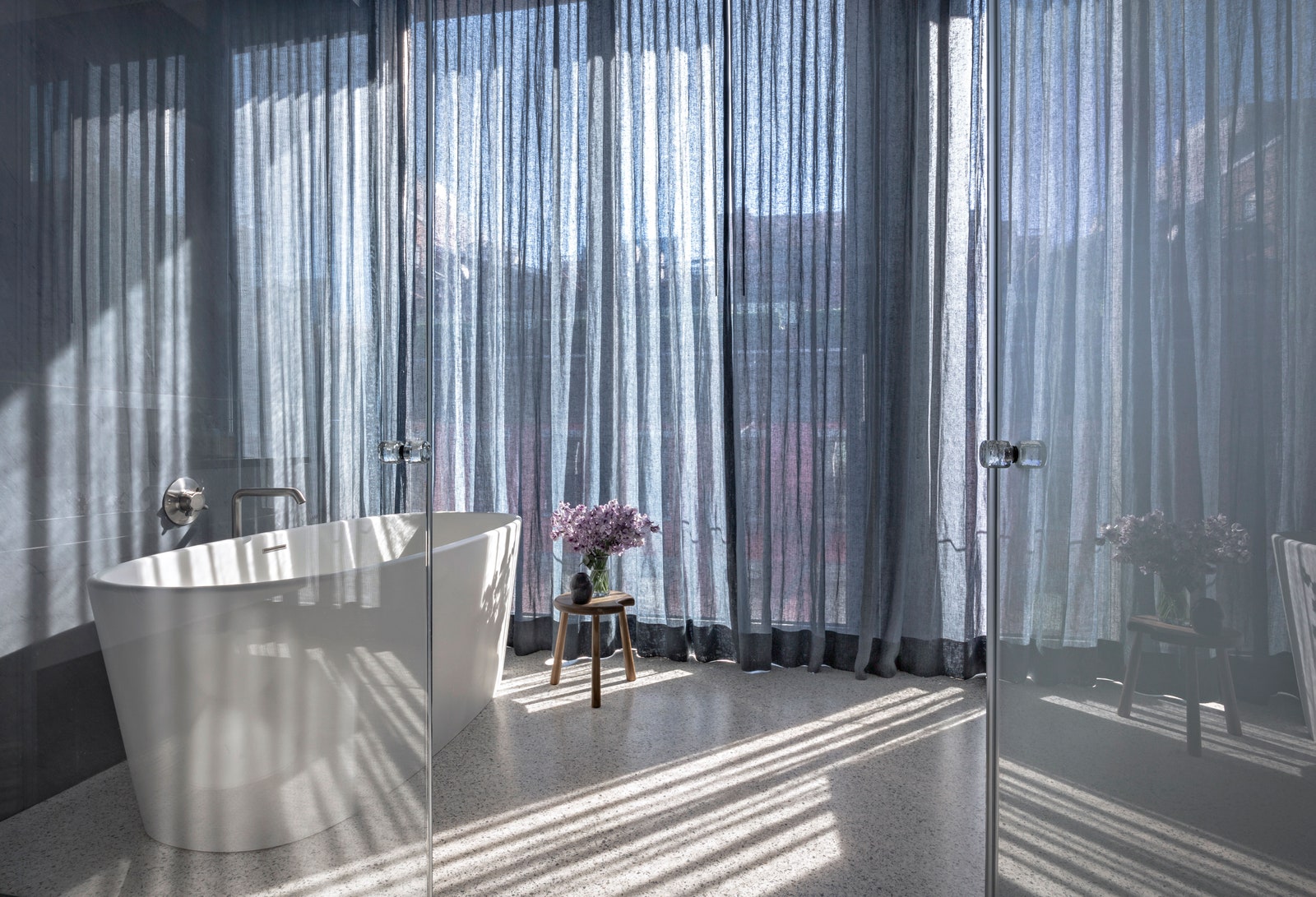 Amoia chose these dark gray sheer curtains, made from linen purchased at Arabel Fabrics, to complement the master bathroom’s gray-and-cream terrazzo floor. The small wooden stool is the client’s own.

“I feel at home, relaxed, and yet my eye is always catching something interesting at which to look,” says Amoia’s client. “The floor-to-ceiling windows let you feel the buzzing energy of the neighborhood, but in a calming and soothing way.”